The New Child : In Search of Smarter Grown-Ups

In this new and challenging look at the status of today's children, Patricia and Don Edgar - two of Australia's foremost authorities on families, children and the media - explain why the 'New Child' is different from their parents and any other previous generation.

Available on order from

More about The New Child ...

This important and candid memoir exposes the behind-the-scenes conflicts and extraordinary backbiting that accompanies those who dare to buck the status quo. It is a story of the politics of creativity, intrigue, loyalty and betrayal, commitment and opportunism, and a must read for anyone interested in Australian politics and culture.
A biographical analysis of the state of Australian television over 40 years as experienced by the founder of the Children's Television Program Standards for broadcasting, the Australian Children's Television Foundation and the World Summit on Media for Children Foundation.

A bold account of current and future work patterns and the labour market in Australia - a battleground between corporate greed and private need, unions and employers, men and women, old and young. Don Edgar argues that we cannot continue to focus on the 'work-family balance' as though it can be achieved through simple programs within individual Australian workplaces. The War Over Work offers a blueprint for how we can win the war to get a life that works for all.

More about War Over Work ...

In The Patchwork Nation, Don Edgar argues that in response to dramatic worldwide changes in the workplace, family and community life, a 'new tribalism' based on fear and inequality has developed in Australia. This new tribalism can only be countered by a total revamp of how we are governed. It means an end to top-down, one-size-fits-all management. We need a more locally-responsive approach to schools, skills training and community support systems. And we need a new business ethic which has human and social values as its basis, rather than focusing on profit alone. His vision for the future is one of a patchwork nation; bound by loose ties, this nation would be connected by a government sensitive to diverse regional needs, and by community-building based on a more direct democratic approach to decision-making and the 'delivery' of services.

More about The Patchwork Nation ...

Being a man in modern-day Australia is a complicated task. The last few decades have seen enormous changes in our society and the accompanying cultural shifts have drastically affected how men and women relate to each other. Drawing on large-scale research studies on marriage and the family, Men, Mateship, Marriage finds that for most Australian men their 'best mate' is usually their wife and that the family is, contrary to popular rumour, not disintegrating. This book is a quiet reclamation, even a quiet celebration, of male-female mateship, marriage and the family, showing that despite new challenges we can, by transforming our personal relationships, we have the power to transform society itself.


(May be available from: www.amazon.com) 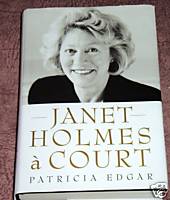 A detailed portrait of a complex woman whose husband Robert Holmes a Court left her with a crumbling business empire to salvage. This biography sheds light on his business deals, power games and tough entrepreneurial style that helped stamp the eighties as a decade of excess. And it takes us into the new Heytesbury and how the Holmes a Court family fared after Robert's death - a story of wealth, conflict, and power in modern Australia.

When Too Much Change is Never Enough
Don Edgar(with Anna Bodi & Glenn Maggs)
(Woodslane, 1997) A Centre for Workplace
Culture Change critique of 'fads' in business and management theory, with
case studies of good and bad practice.

The Family-Friendly Front
Don Edgar (with Katie Spearritt)
(Monash University, 1995)     A critical examination of the
lack of progress in Australian
workplaces in meeting the
needs and responsibilities of
working families.

Contexts of Early Child Care and Child Outcomes
Don Edgar (with Gay Ochiltree)
(Australian Institute of Family Studies, 1995) Results of the first major
Australian study of diverse
child-rearing contexts, with a critical assessment of the literature and polemical debate based on overseas work.

Seen But Not Heard
Don Edgar (Collins Dove, 1988)
Written to accompany the ACTF TV series on how teenagers think and how parents may best
respond. The book and series probe the often-hidden feelings, attitudes and beliefs of kids in the formative and volatile stages of the early teenage years.

Communication Policy in Developed Countries
Edgar, P M., and Rahim, S (eds),
(Routledge and Kegan Paul, 1983)
A description and critical analysis of the communication systems in the United States, The UK, Canada, The Federal Republic of Germany, Sweden, Australia and New Zealand. Chapters examine the technological and cultural forces shaping policy and communications development. The project was the result of a collaboration by The Centre for the Study of Educational Communication and Media and the East West Centre at the University of Hawaii.

The News In Focus: the Journalism of Exception
Patricia Edgar  (Macmillan, 1980)
A collection of empirical studies and theoretical essays by researchers and journalist practitioners on the socialisation of journalists,
concluding news is a form of knowledge that has more to do with social control and social cohesion than interest,diversity and impartiality.
The news services are shown to be highly structured, very selective and firmly supportive of the status quo.

Introduction to Australian Society: A Sociological Perspective
Don Edgar (Prentice-Hall, 1980)
(reprinted 1982, 1985; revised and republished
with Earle & Fossey, 1987, 1992)
The most widely-used text in tertiary sociology courses, still in use and widely cited.

The Politics of the Press
Patricia Edgar (Sun Books, 1979)
A controversial critique of the press as our supposed bulwark against oppression, in a nation where monopoly control is more complete than
in any country in the Western World other than the Republic of Eire.
The book's thesis is based on historic interviews with Australian journalists, editors and senior executives about their coverage (with
content analysis) of the Whitlam Government's dismissal in 1975. The book provoked defensive editorial comment from The Age and The Herald and equally strong
debate from researchers and commentators including Donald Horne, and Professor Henry Mayer.

More about Children and Screen Violence ...

Sociology of Australian Education (ed.)
Don Edgar (McGraw-Hill, 1975) The first collection of papers on the structures and processes of Australian educational institutions.

Social Change in Australia (ed.)
Don Edgar (Cheshire, 1974) A seminal collection of research on Australian society, from the changing role of women to the values of immigrant groups and industrial change.

The Competent Teacher (ed.)
Don Edgar (Angus & Robertson, 1974) A call for greater expertise and utilization of special skills in the training and classroom work of teachers.

Media She
Edgar, P M and McPhee, H,
(Heinemann, 1974) A sharply amusing critique of the advertising industry's (mis)use of female sexuality,
this book reverses standard role images to hammer home the extraordinary violence done to women in the name of femininity.

Under 5 in Australia
Don & Patricia Edgar (with others)
(Heinemann, 1973)
Revised editions 1974 and 1980 A lively and lucid account of the lot of young children in Australia in the early seventies. A call for reform in Early childhood provisions and a better understanding of early childhood development.

Examination Marks: Their Use and Interpretation
Don Edgar (Hall's, 1964) A text for tertiary teacher trainees on assessment and evaluation techniques and the statistics of standardizing examination scores.

Australia and Her Northern Neighbours
Don Edgar (Hall's, 1962)
Updated by Patricia Edgar, 1974 A widely-used text for Australian secondary schools on the development of modern Australia and its nascent links with China, Vietnam, Indonesia, Papua New Guinea and Japan